Corruption is corroding humanity. In his TED talk, The good news on poverty, Bono said that corruption is the biggest challenge in fighting poverty. Think about it though, it’s not only the poverty but every part of life which corruption affects. Growing up in India, I got to experience it at every step of life. The level of corruption there is, it has put India at 94th rank in Corruption Perceptions Index 2012. You may think that’s bad, but there are around 80 countries with worse corruption than India. There have been anti-corruption protests/movements across the globe in recent years but any improvements haven’t been seen yet. In India, corruption has really become part of life. Take this for example. If you need to win a Govt. contract at any level, be it a project worth millions of dollars or a small town street repair, there is a fixed cut for officials who make the decision. There is competition on how much the contractors can bride not how cost-effective or efficient they are. And it’s not only the public sector, same goes for political, police, judiciary, corporate and even the NGOs to some degree. 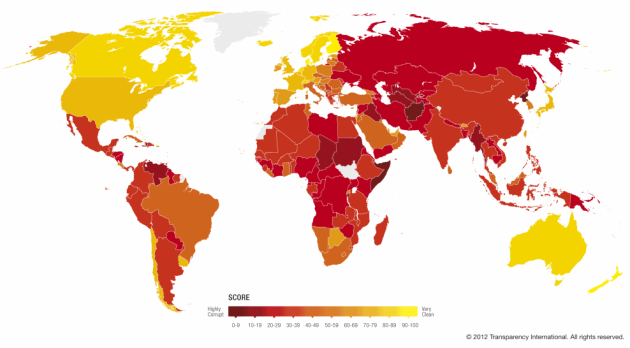 As corruption is a covert activity, it is incredibly hard to measure or track. There is no silver bullet to improve the situation overnight or even in foreseeable future. It will take the global citizens significant time and effort, big or small, to eradicate corruption. Today, we have the tools we didn’t have a few years ago. Across the globe, a large degree of population have smartphones and is part of some kind of social network. The penetration of these tools is going to increase every day. Can we use these tools to create a platform for reporting and measuring corruption with engaging experience? Can we use such a platform to create social awareness in communities around us?

Specifically, I am thinking about an open source app for all major platforms including iOS, Android and Windows Phone to crowd-source corruption activities with some fun. These apps should be built on top of a backend service which provides a cross device experience for users to:

These are really some initial ideas I have and there could be number of other features included. It’s hard to say anything about the success or effectiveness of such a platform. There is a great deal of learning and collaboration required for an effort like this. There are also some issues in this approach.

I have been looking around but haven’t come across any project like this. I did come across ipaidabribe.com, a site for people to report bribes in India but I didn’t get the feeling of a modern web app by looking at it, there aren’t any mobile apps available. I also looked in iOS App Store and could only find Bribr, bribery reporting app for Russia.

What’s your opinion? Can a project like this help fight corruption? If at all started, would you contribute?